Canada’s official motto is A Mari usque ad Mare, which translates as “From Sea to Sea.” 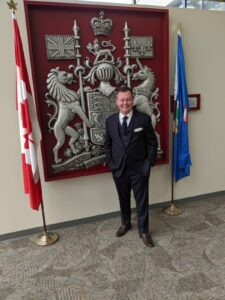 Sean G McKinsley, Managing Partner, Canada Immigration and Visa Services, is pictured above standing with the Canadian Coat of Arms at the Harry Hays Government of Canada edifice outside the Ceremonial Citizenship Room where the Oath of Citizenship is sworn in Calgary, Alberta, Canada

Canada’s official motto, carried on its coat of arms, is A Mari usque ad Mare, which translates as “From Sea to Sea.” The phrase began during Confederation as an aspirational statement, before Canada encompassed enough territory to make it a reality.

The King James version puts it into English: “He shall have dominion also from sea to sea, and from the river unto the ends of the earth.”

The verse was first applied to Canada when, apparently at the suggestion of New Brunswick’s Samuel Leonard Tilley, the term dominion was chosen to represent Canada as a whole when the British North America Act was drafted in 1867.

At that time, Ontario, Quebec, Nova Scotia and New Brunswick were the founding provinces of the Dominion of Canada. New Brunswick and Nova Scotia gave the new country a border on the Atlantic Ocean. However, “From Sea to Sea” did not geographically apply to Canada until 1871, when British Columbia joined Confederation and the Dominion extended from the Atlantic to the Pacific.

In 1872 Reverend George Monro Grant crossed the country as secretary to Sandford Flemming, who was then in charge of the Pacific railway surveys. The next year Grant published Ocean to Ocean, his journal describing the journey. The title is akin to “From Sea to Sea.” Tradition tells that from this point on, Grant preached in many places, using Psalm 72:8 as his text and advocating the adoption of “From Sea to Sea” as Canada’s motto.

The first official use of the term came in 1906, when the phrase was engraved on the head of the mace of the Legislative Assembly of the new province of Saskatchewan. This engraving would have been known to Joseph Pope, federal under-secretary of state at the time, and the phrase evidently impressed him.

Major-General Willoughby Gwatkin, one of the committee members, had proposed that the motto be In memoriam in spem (“In memory, in hope”), but Pope’s counterproposal was adopted instead.

On 29 September 1921, after viewing the final design, Pope wrote in his diary: “Our Arms are very handsome … everything that can be desired. The motto A Mari usque ad Mare, which is an original suggestion of my own, I regard as very appropriate.”

Yukon Premier Dennis Fentie argued such a change would better reflect Canada’s full extent, adding a “north-south perspective” to the dominant east-west way of thinking. The premiers said that as climate change affects the far North, it will be increasingly important for Canada to establish its claims along its northern ocean. Melting polar ice could finally clear the fabled Northwest Passage for shipping and allow greater access to the North’s natural resources.

While the official motto has not been changed, many Canadians already colloquially use the phrase “from sea to sea to sea” in describing the country. For example, when CBC broadcaster Peter Gzowski died in 2002, then-prime minister Jean Chretien described him as “an unforgettable presence who will be terribly missed from sea to sea to sea.” When Prime Minister Stephen Harper officially opened construction on the Inuvik to Tuktoyaktuk highway in the Northwest Territories in 2014, he said the road would for the first time connect Canada “from sea to sea to sea.”