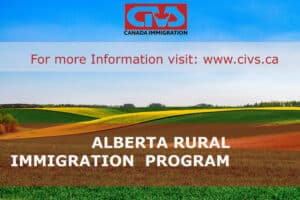 Alberta Immigration Department is presently engaging with programs to explore pathways for settlements for immigrants. Jason Kenny, who served as Canada’s Immigration Minister had promised to generate the Rural Renewal Program and Rural Entrepreneur Immigration Program in Alberta if elected will use his authority to rejuvenate and develop smaller communities around the province.

In February, Kenney’s United Conservative Party (UCP) had prospective program would benefit skilled foreign workers and entrepreneurs to local communities in Alberta (i.e. Brooks and Wood Buffalo). The two pathways would be the avenue to increase new promised permanent residents to the rural communities in the province – 32,000 through the Rural Renewal Program and 8,000 through the Rural Entrepreneur Immigration Program.

The model of UPC was the successful program of the province of Manitoba through Modern Community Initiative that wanting to draw on for the Rural Renewal Program. The population who settled in Manitoba has increased significantly due to this program, and that would also help the Alberta rural communities to gain the same results too. The Rural Renewal Program would be connected to the federal Express Entry system, which is Canada’s principal source of skilled foreign labour.

Kenney’s campaign for the Rural Entrepreneur Immigration Program pledges a goal to welcome 500 experienced immigrant entrepreneurs and their families each year. The potential entrepreneurs would have to meet the minimum investment and net worth threshold and would execute to vigorously managing and operating a business in which they have at least 51% ownership of the business. Successful applicants will gain a two-year work permit and could later be eligible for Canadian Permanent Residency.

To know more about these pathways,  book for an appointment with our Consultants.   Click here